Beckham's on the Ball When it Comes to Great Hairstyles

I don't have the best memory for sport, but one thing I always remember is David Beckham's Mohawk hairstyle during the 2002 FIFA World Cup. And you know what else I remember? All those wannabe Beckhams running around with the same hairdo for years and years after (admit it, I'm sure you're guilty of flirting with the Beckham Mohawk yourself sometime in the past). It seems that Beckham's different hairdos are talked about just as much as his soccer skills, and a new season often means a great new style. At TheHairStyler.com we thought we'd put some of his great cuts from over the years under the microscope. Have a read and see what you think...

In 2000, David's relaxed hairstyle showed he can be cool, calm and collected. Ok, so the centre-part, or "bum-part," is sometimes the "butt" of many hairstyle jokes, but it really suits Beckham's round face. It's also an easy to manage no-fuss style, requiring only the tiniest amount of product.

But we only have to take a look at any sixteen-year-old girl's wall (and most men's fashion magazines) to know that this style is only one of David's favourites. 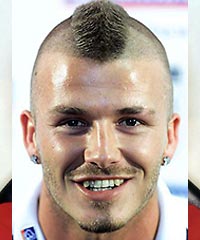 In 2001 David shocked. This style certainly isn't on any "tips for job interviews" lists, and it's not the kind of hairdo you'd bring home to your mum either; it's a serious statement style, shaved super short through the sides and back. Not for the faint hearted, this style is perfect for guys like Beckham who think they're anything but gutless. 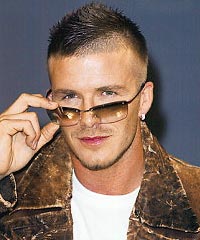 Around 2002, David's sports reputation and wild side were the talk of the town. With cameras following him everywhere, David had to look sensational day and night. So, he single-handedly reclaimed the brown leather jacket from the 1980s and paired it with a more cutting-edge hairdo.

In this style the use of the clippers at the front creates a great asymmetrical look (that's probably not the best choice for guys with receding hair lines). 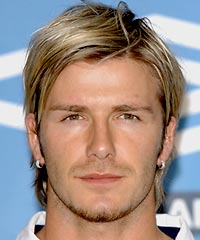 In 2003 Beckham's style was subtle. His look was classy and sexy-yet innocent at the same time. The secret is the layering throughout, creating a shaggy finish all over.

It's a low maintenance hairdo that's easy to style and is perfect for guys like David with fine to medium-fine hair. Why? It falls naturally flat on the head and needs little time to style. 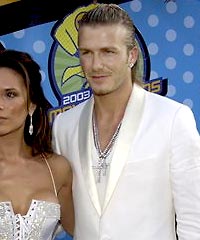 In the same year some big things happened in David's life: he left Manchester United to play for Real Madrid, he tied the knot with Victoria, and, he decided to disprove the common conception among fashionistas (except Karl Lagerfeld) that male ponytails are out.

For Beckham this style definitely worked. It's simple and easy: when playing the game that made him famous he only had to tie it back. For many, this slick, smooth style marked his evolution from wild child into a sexy icon. 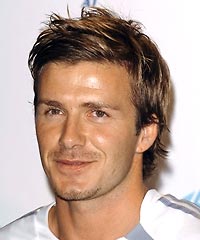 From 2004-2005, David continued "wowing" fans-even after all those years. His soccer's had its ups and downs but thank goodness he's kept his hairstyles nice and sharp. In this photo he's got an all-over funky textured cut. This look is kind of flirty: the hair's chipped and textured for definition and edginess. It's a style easy to re-create with a little wax or moulding gum. 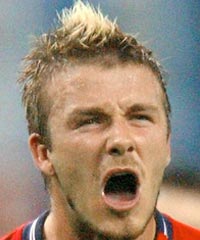 For Beckham, 2006 was marked by more Mohawk action. This style was definitely part of something big with millions following in his footsteps. His hair's cut short through the back and sides, left longer at the top, and styled into a spike. It was the blond tips finishing off this style that made it so unforgettable. But unfortunately, many people didn't move on from this hairdo when Beckham did. 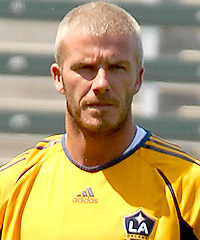 Here David's sporting a more casual and comfortable hairstyle, the "head shave" or "buzz cut." Okay, so maybe this style's not for everyone, but there's a lot to be said for how easy it must have made David's morning routine. But then again, he's probably just reprioritized: spending more time now perfecting his facial hair and matching his shoes and ties.

So why is it that David Beckham's hairstyles are always such winners? Is it the simple fact that he's not afraid of change? Or is it that he's just so good-looking he could pull anything off? To be honest, that's probably a big part of it (who else can really make a "buzz cut" work that well? Not even Brad Pitt in Fight Club). But the main reason, I think, is that Beckham's on the ball: he understands hairstyles and he's got a smart stylist. What I mean is that he chooses styles that suit him. And that's not rocket science. Try it yourself at TheHairStyler.com.

Recently, Cosmo published its list of the world's sexiest men, and surprise surprise, it wasn't full of surprises. It's living proof of the prejudice in society that says men get sexier when they get older and women don't.
Men's Hair Trend: Slicked Back Side Parts

Men's hair this year, they say, is going to be short; short and pretty neat and tidy. A version of this trend that you've probably seen on film stars lately- like George Clooney, Brad Pitt, Leonardo DiCaprio, Tom Cruise, Daniel Craig, Aaron Eckhart and even Zac Efron- is the slicked back side part look.

The Hairstyles That Stole the Show

Sometimes, when I'm watching a movie, I get really distracted by a character's hair. It can be the main character, a minor character, or even a cameo. And I don't just mean distracted, I mean DISTRACTED! Like every time I see them, I'm thinking about their hair, to the point where the first thing I say to my film buddy (who's usually looking a bit poorly because they know they're just about to get an ear full of one-of-Roger's-film-tirades) is: "Was it just me, or was that film all about their hair?"