by Roger Dawkins (TheHairStyler.com)
Updated on August 14, 2018
Meg Ryan's hair can teach us all a valuable lesson, and even though we're already really familiar with Meg Ryan's hairdos, I still think we should take another good look and take special note. So dig out When Harry Met Sally, French Kiss, You've Got Mail and Proof of Life, and take a long hard look our hairstyle pictures too.

The valuable lesson is this: when you're onto a good thing, stick to it. Meg has basically had the same hairstyle her whole Hollywood career, so much so that "Meg Ryan hair" has pretty much become a classic hair style in its own right. It's a "classic" because it has a timeless appeal- yet it wouldn't be a classic if- in all its similar versions throughout Meg's movies- it didn't suit her so well. 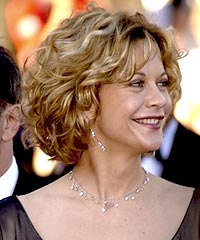 Something is classic when it has the weird quality of being tied to a certain period of time, yet timeless at the same time. For example, a bob haircut is undeniably a 60s haircut, yet it still looks great today. It's the same story with long layered hair from the 70s- both are from a certain period of time, but they look great anytime too (not all hairstyles are like that of course). 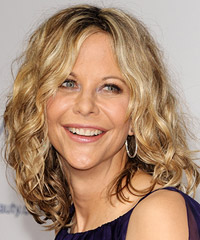 There's something else about classics too. A classic typically has an unmistakable quality about it- like a kind of aura or charisma. The bob's a good example again because a bob not only looks great, but radiates a certain sophistication and elegance. It conjures images of smokey bars and chic women. It's that aura or charisma that sets classics apart, giving them the specialness that makes them endure. 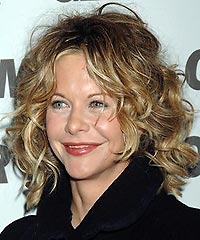 Meg's Ryan's hair has become a classic, worthy of being displayed in a gallery in fact! The Meg hairstyle is typically between chin and shoulder length, golden blonde with highlights, and with lots of texture created by curls and sliced layers. It's a style that's been scrunched and messed up with moulding cream. It's unmistakable and undeniable; tell anyone you're going to get a "Meg Ryan hair style" and they'll know exactly what you mean. 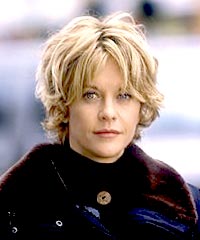 Meg's hair's also become a classic because of its aura. I really think the defining factor of a Meg Ryan hair style is the "cutesy" feeling given off by all of her hairstyles. She's got a kind of Shirley Temple thing happening, and I guess it all started (and stuck) from the popularity of the pouting girl next door she played so well in When Harry Met Sally.

But like I already mentioned, Meg's hair wouldn't have become a classic if it didn't suit her to begin with. She's got quite an oblong face shape, and whether her hair's shorter or longer bangs typically work well to make her face seem shorter. Kicking-out layers and curls also add much needed width. The blonde tone with highlights effectively brings out the color of her eyes, and the textured scrunched look suits the cutesy and bubbly personality she portrays.

Yet if Meg's hair didn't suit her, it wouldn't have become a classic. It would just be "that hairstyle Meg Ryan always has" (and this is something like the effect of Miley Cyrus' hair). Also, the fact that Meg gets a similar style time and time again shows that she gets it; I mean, it shows that she understands hairstyles and what suits her complexion and face shape.

A lot of people in the media right now are calling Meg Ryan a "has-been" and a "z-lister," and I think that's not only unfair, but kind of naive too. What saves her from these things is her classic hair; Meg Ryan will never be a has-been because of her hair. And, her hair's "classic," in large part, because she's realized what suits her and stuck with it. When you're onto a good thing, stick to it.

Nothing creates a big statement like a drastic color change and you can't get more drastic then going blonde. But don't rush into it: such a big change requires careful thought.
The Right Hairstyle for Your Face Shape

One of the most important factors of hairstyle suitability is face shape analysis.