by Roger Dawkins (TheHairStyler.com)
Updated on July 09, 2018
Ever wondered what would happen if teen celebrities Miley Cyrus and Selena Gomez were pitted against each other, Survivor style? Roger Dawkins finds out.

Miley Cyrus and Selena Gomez are teen sensations on top of the world and at each other's throats. Who wouldn't feel a bit of healthy competition? I mean they're both Disney starlets competing for the spotlight, with blossoming singing careers and "dating" the same guys (Selena has allegedly had a fling with Miley's ex: Nick Jonas)? Competition's normal, especially when you're 16, and especially when you're growing up in Hollywood.

With all this hormone and limelight fuelled competition I couldn't help imagine what it would be like if Miley and Selena were pitted against each other in a fight to the death- kind of like the warm up event of a gladiator battle in ancient Rome. But that's wrong and inappropriate. Instead I imagine them facing off Survivor style, like the TV show. Who do you think is better? Check out their characteristics: 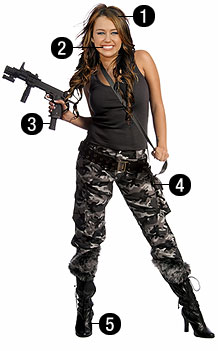 There's little doubt Miley's got cool hair. But there has been some debate about whether or not it suits her. It's a great example of a long tousled style with medium to long layers cut through the back and sides creating plenty of movement and bounce. Here's the thing though: it doesn't suit her round face shape. She really needs a straighter hairstyle with a center part. Also, some people think this wavy look is the kind of hairstyle more suitable for a more mature woman in her 20s, like Jessica Alba.

Miley's certainly got a zesty attitude, and this characteristic would do her well in a Survivor showdown. She likes to party, which was clear in her recent birthday bash at Disney Parks. Also, she doesn't mind participating in a little bit of bitchiness, and the public experienced this firsthand watching the YouTube video where Miley impersonates and mocks Selena and Demi Lovato. "I was just trying to be funny" Miley explained. Yeah right.

Miley's been honing her showbiz skills for some years now. She's 16 and the daughter of country music singer and actor Billy Ray Cyrus and is well known for her role in Disney's Hannah Montana, from which she released several soundtracks. She's done a bunch of other stuff too, wholesome stuff like benefit concerts. She's topped the charts in Australia, she's won a Teen Choice Award, and she's sung on TV in the UK.

There's quite a bit of emotional baggage in Miley's history. Let's be honest, she seems a bit confused most of the time; I mean she does things like take risqué photos of herself and then regrets it a few days later. She's so contradictory... even lately there's this whole thing about her "boyfriend" (an underwear model), yet she maintains he's not her boyfriend... But is that really possible... did I mention he's an underwear model?

It seems that public opinion is pretty much against Miley. People have gotten over her, and are tired of her antics (that's what a recent survey showed anyhow). And I kind of agree... I think Miley's peaked in popularity, and now all the stunts putting her in the spotlight are actually working against her. Anyhow, she looks and sounds a bit... er "tired" in her mockumentary YouTube appearance... and if I was Billy Ray I'd be getting a little worried that precious Miley's on an express service to Trainwrecksville. 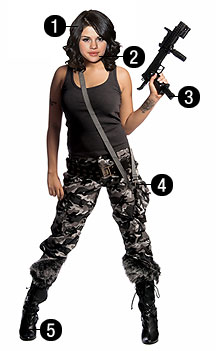 Selena's a little hit and miss with her hairstyles, but the thing she's got going for her is that she likes to try out new things. Here she's wearing a medium hairstyle with waves from the mid-lengths to the ends, and long layers creating a lovely weightless finish. But this example- like a few others- misses the mark a little: the top's lacking shape and structure, her side part needed to be more defined (it looks a little sloppy), and her curls are a little fly-away. Like I said though, Selena tries different styles more regularly than Miley, and this suggests more versatility, as well as a definite self-confidence.

Selena seems like a nice young woman, missing the kind of aggressiveness that would motivate someone like Miley Cyrus to make a "funny" YouTube video mocking her peers. Check out some of Selena's YouTube vids: she is just your typical teenage girl joking and giggling- and that's cool. She's mature and sensible too; for example, of the so-called competition between herself and Miley (sparked by Miley's YouTube video), Selena simply responded: "I'm not interested in being anybody but myself, and I'm not here to replace anyone." End of story.

Selena's also 16, but a little less famous than Miley, and with a few less acting and singing credentials under her belt too. She's been at it since the age of 7 and is best known for playing Alex Russo on the Disney program Wizards of Waverly Place. She's done a bunch of guest appearances on other TV shows, some movies, and recently signed a record deal and is set to release a debut album. Even though she's not as famous as Miley, Selena's nevertheless an accomplished actor and singer already- by anyone's standards.

Like I said, Selena's a mature kid who's dealing well with the media frenzy. She's even managed to avoid getting caught on camera semi-nude (which is apparently quite hard for Disney stars like Miley Cyrus and Vanessa Hudgens). But, whether or not Selena's buying into it, there's clearly tension between her and Miley, and since that's the case you gotta wonder why on earth she would choose to date/hang out with Miley's ex, Nick Jonas... Wouldn't most people stay as far away as possible? It's a bit weird.

Selena's not making a name for herself as a controversial attention-grabbing teen, and she seems well aware (and in control) of her media image. So I think this suggests that Selena's attempting to carve out a serious long term career for herself. To me it's quite clear that she's got a sturdy pair of boots on and she's ready for a long and sometimes gruelling hike to Celebrityville.

Who Would Win Survivor: Teen Celebrity? Miley or Selena?

As much as I prefer Selena Gomez to Miley Cyrus, I think Miley's the winner here and has the most future proof career. Selena's a nice girl, but nice girls finish last- especially in Hollywood. She's missing Miley's aggression, and that kind of aggression is necessary to survive. Sure, Selena seems more versatile than Miley (have you ever seen Miley change her image, or even her hairstyle?), but it's not like Madonna's the most versatile star either and she's been around for donkey's years. Controversy's king for celebrities, and that's one of Miley's biggest assets too. You win Miley.

Who do you prefer? Miley Cyrus or Selena Gomez?

Nobody seems to like Miley Cyrus. A lot of people have judged her and decided that she's the least likeable celebrity around at the moment
High School Musical 3 Hairstyles

Those kids from Disney's High School Musical movies always look great. And they live such a fairy tale life. Even the film's biggest star, Zac Efron, admits everything's a bit idealized in the films. So I guess it's natural for me to think life's just not really like High School Musical. Kids these days are a bit more messed up. I mean, Vanessa Hudgens and Zac are living proof that everyone's not as squeaky-clean as the High School Musical crew (remember the tasteless self portraits Vanessa sent Zac that ended up all over the web?).